Republic of Azerbaijan
Alber & Geiger was able to bring out the extraterritorial reach of EU human rights. This was against the backdrop of its clients having lost all available domestic remedies. The Former Minister of Economic Development of Azerbaijan and his brother were arrested on the eve of the 2005 Azerbaijani election. Initially accused of attempting a putsch, they were ultimately found liable for embezzlement. The European Court of Human Rights had held that the several of their rights had been infringed, especially the right to a fair trial. Nevertheless the Aliyevs remained imprisoned under their disproportionate and potentially wrongful sentences.

They helped us through a sensitive period navigating the political landscape in Europe.
Farhad Aliyev- Former Minister of Economic Development, Republic of Azerbaijan
Alber & Geiger’s strategy utilized the EU-Azerbaijan trade talks to leverage the EU institutional playmakers at opportune moments. Our litigious narrative extracted the EU’s human rights obligations underlying the European Neighborhood Policy (ENP), and demonstrated the innocence of the Aliyev’s. Simultaneously we drew on the Aliyev’s pro-western views, showing through adversarial fact finding that this underlay their imprisonment. Substantively, we put forward that it was incumbent on the Azerbaijani authorities under these circumstances to show their commitment to the rule of law. In order to benefit from the ENP they had to play by its rules. 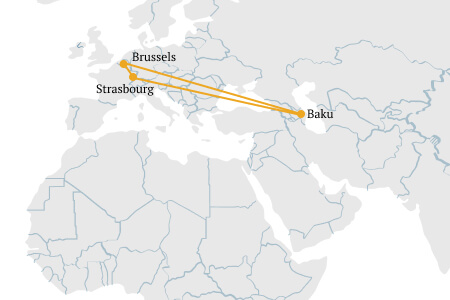 Ultimately we secured a complete pardon for both of the Aliyevs. However, the broader reach of this mandate was the raising of awareness regarding human rights issues in Azerbaijan. This put the EU-Azerbaijani relationship on a trajectory of greater trust. The sensitive political dynamics were tackled head on and resolved with expedience.